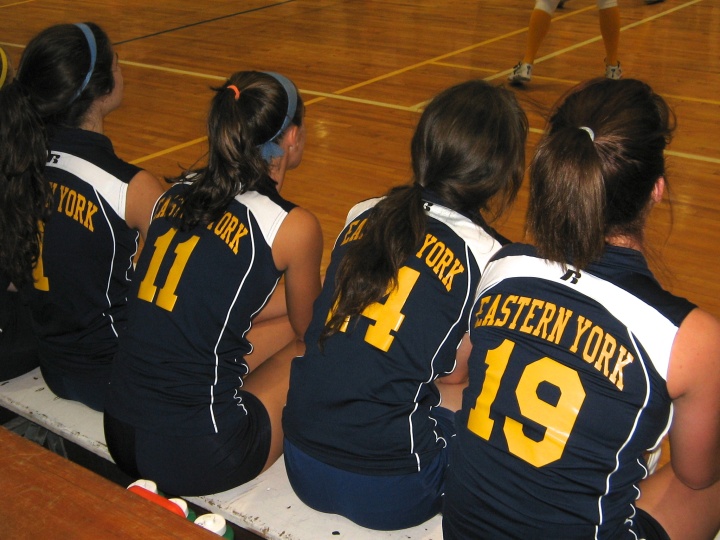 In 2007, I was a freshman in high school. Like every other awkward teenager, I was struggling to figure out all of the trivial aspects of life. I ran track and cross country throughout middle school, but, at this critical point in my adolescence, I decided I wanted more. It was time to reinvent myself. Time to try a completely new experience by becoming part of a(n athletic) team. Somehow, being a member of the Science Olympiad team wasn’t enough, even though my partner and I were the third best middle school food chemists in Pennsylvania. So, I joined the volleyball team.

In my small, rural school, there were no try-outs. Because there were barely enough people to make up a team in the first place, I made JV by simply stepping foot in the gym. I had always been a strange, independent kind of kid who didn’t enjoy the company of others. Still, I dove into this team environment headfirst, camera in hand. I was paired up with my senior buddy, number 14. I always kept my eye on her, watching her every move. Even on the bench, I watched what she did, how she interacted with the other girls. She wasn’t the star player, or the most popular girl on the team, but she was clearly valuable. I wanted to emulate her, to become a valuable part of something bigger than myself.

It seemed like a realistic goal, because she wasn’t as impossibly glamorous as the other seniors. The other girls wore their ponytails flamboyantly high, forcefully pinned to the middle of their heads. My buddy always wore a casual ponytail, flowing simply and without any fuss from the nape of her neck. She didn’t spend every free second hiking up her spandex shorts to attract attention. She was more interested in the game than she was in her appearance. This appealed to me because I wanted to want something the way that she did, as unselfconsciously as she did. She wasn’t an obvious fit for this world, but there was some essential element of the game that kept her coming back for more.

I never discovered that unspoken desire that attracted her to the game, I never found my place in the world of team sports, and I was a terrible volleyball player. But, I appreciated the experience, and all that it taught me about navigating this dangerous world. This week’s Numbers photo challenge had me scrambling for a picture. I browsed tons of ancient photos to find something meaningful. This one really hit me where it hurt. When I found these pictures, I was instantly taken back to all of the insecure adolescent moments when I was pursuing an idea of what a teenage girl was supposed to want rather than something that truly interested me. Fortunately, I’ve grown up in the past 8 years, and I’ve had plenty of opportunities to discover and pursue my own passions. I’m still glad that I had a chance to get it wrong when the stakes were low. After all, how can we learn what’s truly worth our time and energy if we haven’t had the chance to get it wrong?